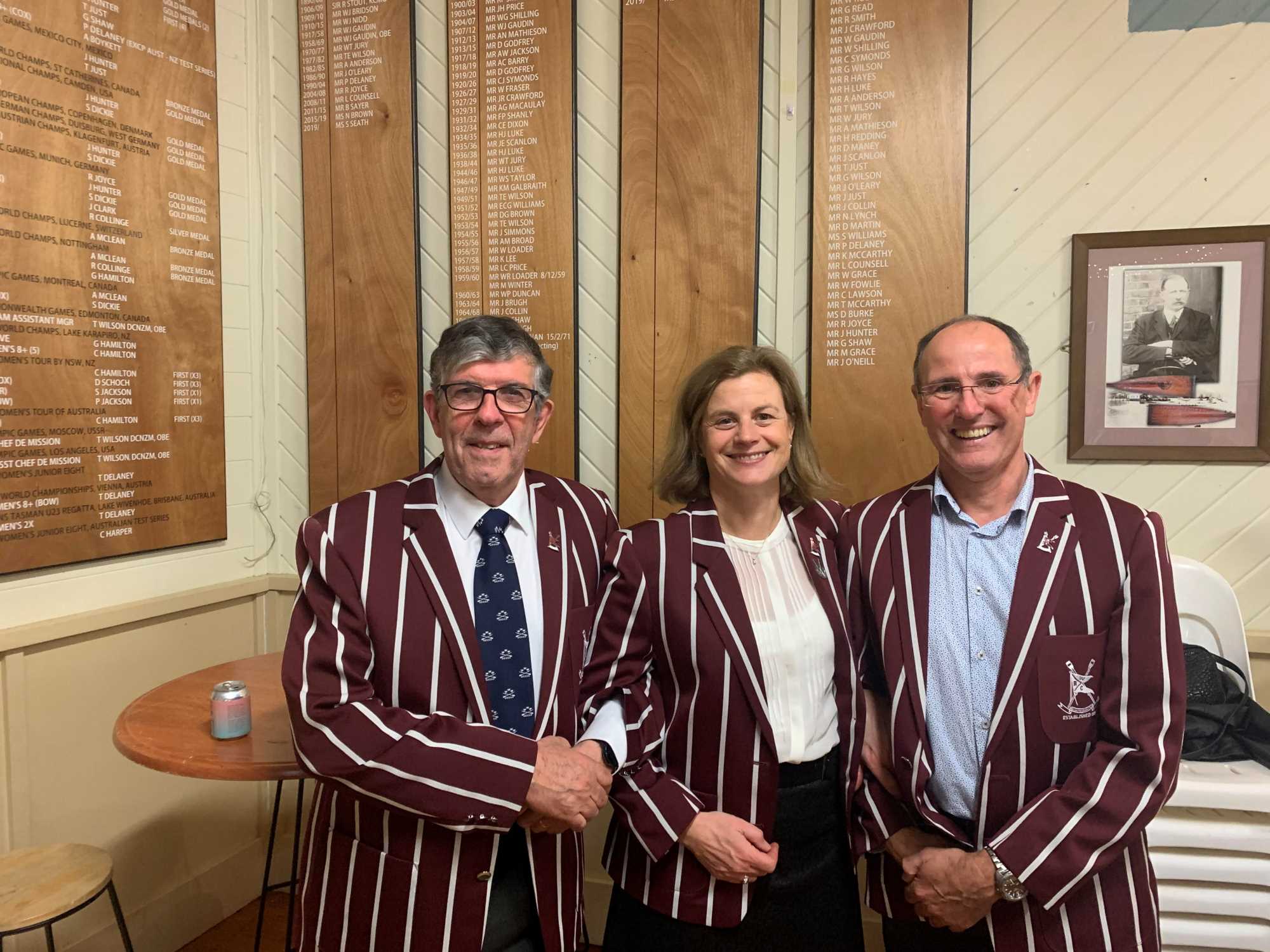 Wellington Rowing Club would like to recognise the many years’ service that Chris Jones, Nina Brown and Allan Mills have provided to the club by making them a life member. Life Membership should not be awarded lightly. It is reserved for exceptional contribution to the success and sustainability of our club. Read on to see why they deserved recognition with this award:

I met Chris when he was coaching the 2009/2010 men's crew with Laws, the "pink year". I managed to persuade him to get in a boat with us and he immediately changed my whole thinking about moving a boat. I'd been coached at school for 2 years and had been coached a bit by one or two masters coaches but 5 minutes with Chris in the boat changed it all. It was about sympathy with the water, I can't possibly explain it all in two minutes, I've spent the last 10 years trying to teach it.

Chris's enthusiasm for his crews knows no bounds, if I had a $ for every time he came off the water with a broad grin on his face and said "We've got an eight!" I'd be a rich man. Year in and year out he gets excited about the athletes and their prospects, and no matter who it is, be it a novice double or a snr quad, he'll be a bag of nerves at the finish line, willing his crews down the course and hoping they do their best.

And lastly I would like to say something about him not always being popular, but that's because he installed a no dickheads policy long before Graham Henry put it in his book. His unwillingness to compromise and his sense of fairness has occasionally put a nose or two out of joint, but in all cases, the club has benefited from the loss of a "dickhead" or two.

Chris's results are too numerous to mention, he's instilled a regime off success that makes the extraordinary seem ordinary. He has won four gold medals, any number of silver and bronzes and all levels, resulting in winning the Wellington Rowing Association coach of the year 3 times.

Nina first became involved with Wellington Rowing Club through her daughters Georgia and Emilia who rowed for Samuel Marsden.  Drawn into competing in the Corporate challenge in 2012 for Marsden and then taking the plunge and completing a novice year cemented her induction into the club.

Mid-winter camp at Wanganui in novice season was a stand out. Nina, Pauline, Eleanor Steel and Rachel Hooper were in a four, with Mark coxing.  Absolutely freezing morning, walking on crunchy frost to the river. About 1 km upstream, due to some technical challenges and a bit of panic, the four rolls over and swimming was the new sport.   Bloody freezing apparently (according to Mark) but it didn’t put her off.

One of the more notable competitions being the Jury Cup in Wanganui, where half way down the race Nina collapses, lying backwards in the boat. She had passed out having forgotten to breathe! A minute later she was OK and they finished the race.

In 2013 she competed in her first NZ Masters nationals in Ruataniwha, gaining a bronze in the womens masters C coxless four. And we can’t not mention the race in Clive, where Nina and Mark in a double beat Allan and Barry in a pair.

In 2015, Nina was elected President of the Club and led the club for four years: a period of success on the water, with over 20 medals won at the National Championships as well as exceptional results at major regattas. Over this time the membership has grown, increasing the administrative workload for all, but especially for Nina.

At the same time, Nina steered the Club through a major strategic review, revitalising the constitution and bringing in best practice governance. We were also faced with the massive task of dealing with a heritage building that required a second stage of  earthquake strengthening.  Not only did she manage the complexities of this she secured a $176,000 Lottery grant towards the work.  Each of these was a major task and she has cheerfully and energetically given her input, despite at the time having a full-time job.

In 2016, Nina managed the group of novice women and coached them to Gold at the National Championships in the Novice Fours. She has also managed the growing Masters' squad, which developed rapidly with her help.  In the same year WRC was voted NZRA Club of the Year (2016).

Last year after completing her four years as president she stepped into the vacant club captain role and has continued to provide strong leadership, mentoring and support to many through the club.  Most recently earning the club over $100k in grants to help fund the exterior preservation of the club building.  $70k of that through ringing the Mayor, in a very timely last day of the financial year when we found that the building had significant rot.

Nina is exceptional, because her contribution has been sustained, has been unstinting and has required her to act as leader, manager and coach of a complex organisation. As a late-comer to the sport, she has established respect from every quarter and leads the Club with calm, inclusive authority. She is across the rowing programme, our equipment needs, logistics for regattas and accommodation as well as the management of the Club finances and facilities.Life Membership is not awarded lightly. It is reserved for above and beyond contribution to the success and sustainability of our fantastic club. We believe that Nina Brown is an extremely worthy member of our club whose contribution fits with this ethos for Life Membership.

Allan’s rowing career started in October 1975 – in his words: “I'd had a particularly big Saturday night out at the Whanganui Rugby Club Prize Giving and was feeling slightly delicate on the Sunday morning, when my brother in law turned up and asked me if I was interested in joining him in the Union Boating Club Novice squad.  Little did I know that that was the beginning of a love/hate relationship with the sport of rowing.”

Allan became a very effective sweep oarsman who trialled and was accepted for NZ Lightweight Juniors until a knee injury took him out of the sport.

He first became involved with Wellington Rowing Club through the Corporate Challenge in 2009, getting back into the boat after many years of running and cycling. He found he still loved the sport and has continued to row ever since.

Allan was a major driving force in the revival of the WRC Masters’ Squad, where he has won many medals at various Masters’ events around the country, most often in the stroke seat. Two highlights have been winning the Men’s D 8+ at the Masters Champ and being the 1st NZ boat home in the Men’s eights at the World Masters’ Games in 2017.

He has managed and driven our Corporate Challenge for the last 9 years. This is a huge fundraiser for the Club, as well as providing a pathway for many new Club Novice and Masters to the sport. He is a patient coach and very organised co-ordinator of this programme.

Allan’s enthusiasm is unrelenting and he has always given freely of his time: he has won several “Best Masters Male Rower” awards at previous prizegivings, but, despite his high level of skill and experience, he doesn’t hesitate to jump in a boat with anyone and to provide guidance and encouragement from the boat.

For several years, Allan has fulfilled the role of Safety Officer for the Club. Particularly since the Health and Safety at Work Act that came into force in 2016, that has been the single most important role in the Club. He has carried it out with enthusiasm and a pragmatic approach that has earnt much respect. He is insistent and consistent without being petty and with a full understanding that we are here for enjoyment. We have been very fortunate to have the benefit of his boat skills, his understanding of the harbour rules and the strong relationship with the Harbour Master that he has developed.

Allan’s other roles at the Club have included coach at Onslow, Masters Coach, Committee member for many years, Vice President for 6 years and, more recently, a member of the WRC Board.

He can always be relied on to go “above and beyond”. He is one of the first to put his hand up to drive the truck and trailer, is always there and directing traffic at Masters boat loading, fixes anything that is broken, builds, for example, racks for oars, paints the shed and attends meetings with builders and Council, supporting the Club and the Club Captain unwaveringly.

I asked a former President of WRC, Barry Sayer, who was also Allan’s pairs’ partner for many years, for some thoughtful and inspiring insight into Allan the man. I had to delete most of it, but his heartfelt tribute went like this:

“He can’t sing, can’t dance, and can’t hold too much grog. He’s always pretty fit and a pretty handy rower. He’s also quite useful with a power tool on occasions. I would love to see him as a life member”

It’s great that Allan decided to reengage with the sport of rowing, even more so that he chose to do it with Wellington Rowing Club.  We have been the ones who have truly benefitted from his enthusiasm, support and genuine volunteer spirit. We believe that Allan Mills is a very worthy recipient of this recognition and consider it time for his contribution to be acknowledged in the most meaningful way.”